When we talk about the education system in our country, the comments often focus on the qualities of the teachers or that the children are not motivated enough to learn. But what is the thing they are tasked with learning? And is what is written in their textbooks really sound, reasoned and appropriate for their age? Certainly the following examples provide a clear and eloquent answer: 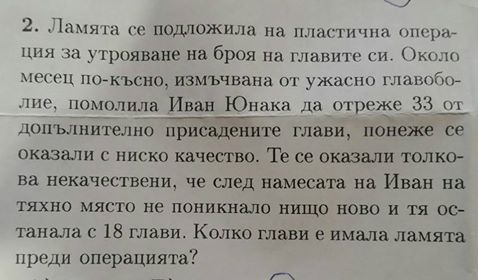 Recently, fourth and fifth graders had to calculate how many heads a llama had botched plastic surgery. This was one of the tasks of the "Ivan Slabashev" tournament, which is organized by the Institute of Mathematics and Informatics at the BAS. Here is the condition:

"Lamya underwent plastic surgery to triple the number of her heads. About a month later, suffering from a terrible headache, she asked Ivan Yunaka to cut off 33 of the additional grafted heads, because they turned out to be of low quality. They turned out to be of such poor quality that after Ivan's intervention nothing new sprouted in their place and she was left with 18 heads. How many heads did the llama have before the operation?" 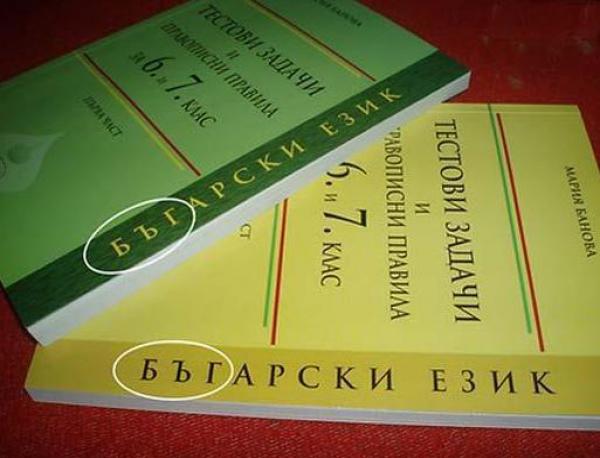 On the very cover of the aid is written "BULGARIAN LANGUAGE". In the 11th grade textbook of "Anubis" publishing house, the name of our country Bulgaria was written as "BAlgaria".

In the textbook "Man and Nature" for the 3rd grade of "Priroda" publishing house, they claimed that the word chocolate is not written with "sh", but with "sh". In the same textbook it is also written that the sea is salty because "there is table salt dissolved in it". 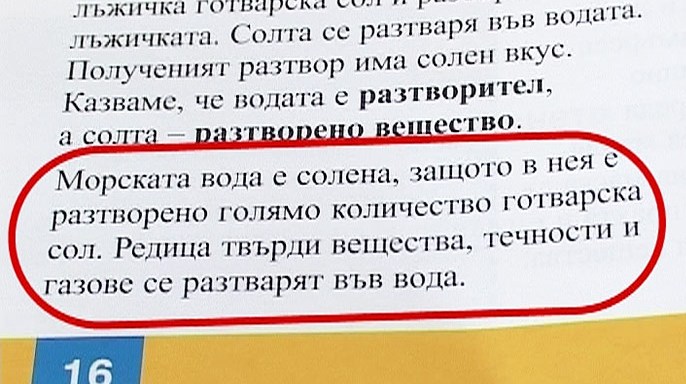 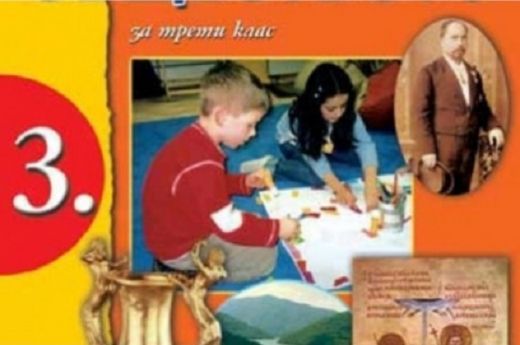 In a textbook on "Man and Society" published by "Prosveta" publishing house, it was explained to third-grade students that Samuel fought for the independence of our country, but in 1014 "the heart of the warrior king stopped beating" without specifying the cause of his death. This is the same textbook in which the word "zaptie" was explained as "policeman", and in its original version, the battles of King Simeon against Byzantium were marked with the clarification that "they did not leave a lasting mark on our past".

In the same textbook, the startling facts continue in full force. It turns out that Vasil Levski was caught by the police because he was breaking the law. Therefore he was sentenced to death and killed, without mention of the gallows, nor of his struggle for liberation. In short, the third graders are left with the impression that the Apostle of our freedom was justly punished for his crimes.

Kids learn from a mutt primer with a shiny jeep

"There was also a shiny jeep. He was very arrogant. He didn't follow the rules. He didn't drive anyone. Drove around town in flip-flops." As incredible as it sounds, this is part of the curriculum for first graders and their primer, through which they need to learn the basics of reading and writing. 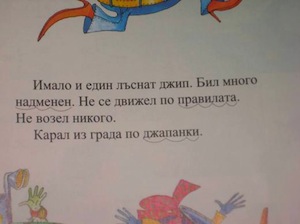 "Below comes a Mitsubishi SUV with a heavy bumper, windows rolled down."

Again, the music textbook for the third grade is on a similar mutren-car wave. The text can easily be used to create some chalga hit, but for some reason - it turns out to be in the teaching material for third graders. There he is: 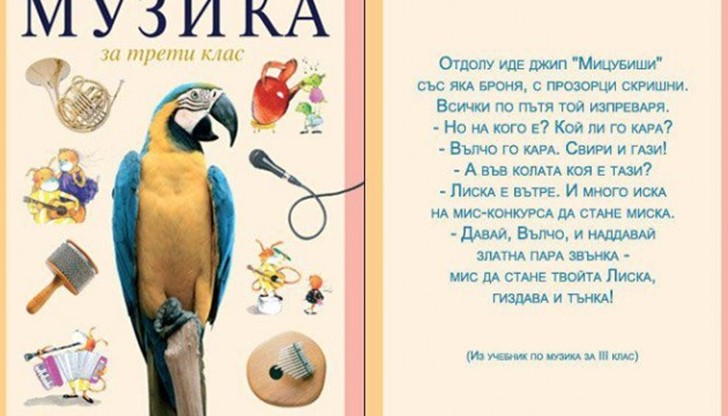 "A Mitsubishi SUV is coming from below
with collar armor, with hidden windows.
Everyone on the road he overtakes.
- But who does it belong to! Who drives it?
- Wolf drives him. Play and gas!
- And who is that in the car?
- Liska is inside. And she really wants to win the Miss pageant.
- Come on, Wolf, and bid for a golden pair of bells - I hope it will be your Liska, fat and thin!"

It is a textbook on information technologies for the 4th grade. The students had the task of writing a text on the topic "My mother and I". An example of exactly how to write and format a text is given, and its content itself is ridiculous, to say the least.

Here is a quote: “Mom likes to drink beer (Ariana)”. In another sample text with the same purpose it is written: "Mom likes brandy with salad."

Thus, the theme "My mother and I" gives the little ones a clear idea of ​​what their mothers actually do all day. And for the author of the textbook, we can say that he definitely overdid the beer (brandy) before he created this masterpiece.

And more pearls from native textbooks:

"Plants produce their own food. They are called producers. Animals eat ready-made food - plants and other animals. That is why they are called users” – “Man and Nature”, 3rd grade, ed. "Bulsvet"

"Shipka Peak is located at the top of Mt. The militiamen are situated on it" – Literature textbook for 7th grade, ed. "Anubis"

"The liberation of Bulgaria is unnecessary, because money must be allocated for an army and a sharp decline in economic life is noticeable, for example the drastic reduction of goats”, ed. "The Red House"

How to stay calm when a child is throwing a tantrum or has an emotional breakdown?