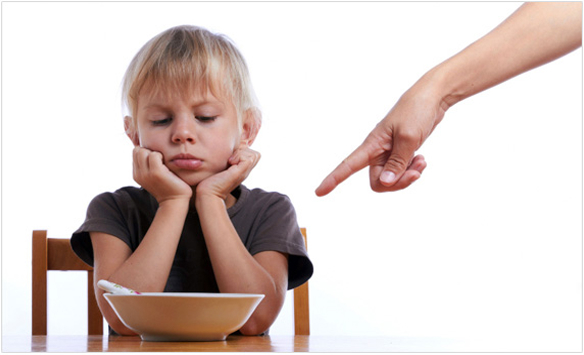 There is hardly a person who does not remember a childhood in which his grandmother or his mother chased him with a spoon in hand, or how he struggled for hours with a dish that he did not like at all. When we become parents, however, we often do the same and use threats, bargaining and coercion to get our little heir to eat his portion.

However, should we force children to eat and what are the consequences? Here are some common mistakes parents make.

Using forceful methods to force a child to eat is the worst thing we can do. Already in early childhood, children show their differences and peculiarities - some eat more, others - less, and each has its own biological clock and taste preferences. It is quite normal for you as a parent to be concerned if your child is fussy, eats only a certain food group, has no appetite or is quite weak. But surely shouting and threats will not solve the problem, they will only make it worse. Often, force-fed children develop a lasting aversion to certain foods that persists into adulthood.

In our latitudes, the belief that "the more the child eats, the healthier and stronger he will be" is still very popular. However, the truth is that little ones need a certain nutritional regime, which does not mean permanent trampling and pouring huge portions. At this age, basic eating habits are formed, and if the child gets used to overeating, this is a strong prerequisite for overweight. There is nothing true in the notion that plumper children are healthier, in fact the opposite is true. Overeating is a major prerequisite for the development of overweight, diabetes, weakened immunity, slow metabolism, etc.

Many parents complain that their child refuses to eat a certain food - for example, tomato or broccoli. This is not a reason to worry, nor do you need to look for a way to get the child to eat everything at any cost. It is important to make sure that he gets enough useful nutrients, and not to focus on the absence of a certain product in his menu. Children, just like adults, have their own taste preferences, so be understanding and don't force them.

Do not think that the child has had a more complete meal after you have cut him 2-3 slices of bread and he has eaten them without a murmur. It is far more reasonable to think about the quality of the food that your little heir consumes - what is its origin, whether preservatives, sweeteners and colors have not been added, what is the presence of vitamins and minerals in it, etc.

Certainly one of the most important factors that influence children's attitude to food is how parents eat, what products are most often present on the table and how the child was fed in early childhood. If, for example, you give your child a slice of chocolate or a waffle for breakfast, he develops a habit of getting sweet food in the early hours of the day. This habit persists, and even if after a while you decide to change the diet, it will be very difficult. The first four years of a child's life are crucial. In them it forms its eating habits and how and what you eat serves as an example. Therefore - explain to the child in accessible language why some foods are useful and others - not, encourage him to try different things, but in no case be authoritarian and do not impose your will at any cost.

Use games – if you manage to make the child perceive the preparation of the food and the eating itself as something fun and useful (and not as something that he "must" do, and under compulsion), the situation will take on a completely different appearance. For this purpose, involve your son or daughter in the preparation of lunch or dinner from an early age. You don't have to give him a knife and a pan, just let him watch and ask for his opinion - for example, "should we slice or cut these potatoes into cubes?", "Should we grate cheese on top of the tomatoes or should they be crumbled ?”. You can let your little foodie stir the custard mixture or mash the mashed potatoes. These activities develop children's creativity and also create an attitude towards food because they themselves have participated in its preparation.

Give an example from your childhood – sometimes the best way to deal with feeding whims or to motivate a child to eat is to just be honest. Tell him about your childhood, about how you yourself did not like one or another food, but after time you realized how tasty and useful it is.

Accept the facts - don't force the child to eat something he doesn't want to eat, don't convince him that "it's not really that bad". Every person is different. Some children have texture problems: their eggs are runny; others cannot tolerate tomato seeds and peach moss.

Be inventive - often children's reluctance to eat (vegetables for example) is related to the fact that their age is strongly influenced by the way they perceive it purely visually. You can solve this problem with a little more ingenuity - serve to the child a food that he likes in appearance and the chance of eating it increases many times. Broccoli, carrots or bananas that have taken the form of cartoon character or drawing can become your little one's favorite menu, as long as you have the time and desire to get creative. Check out some ideas HERE.

7 Signs You're Raising a Spoiled Child

10 ways to educate without yelling, slapping and punishment

Baby kel (milk crusts, crusts) - what they are and how to deal with them